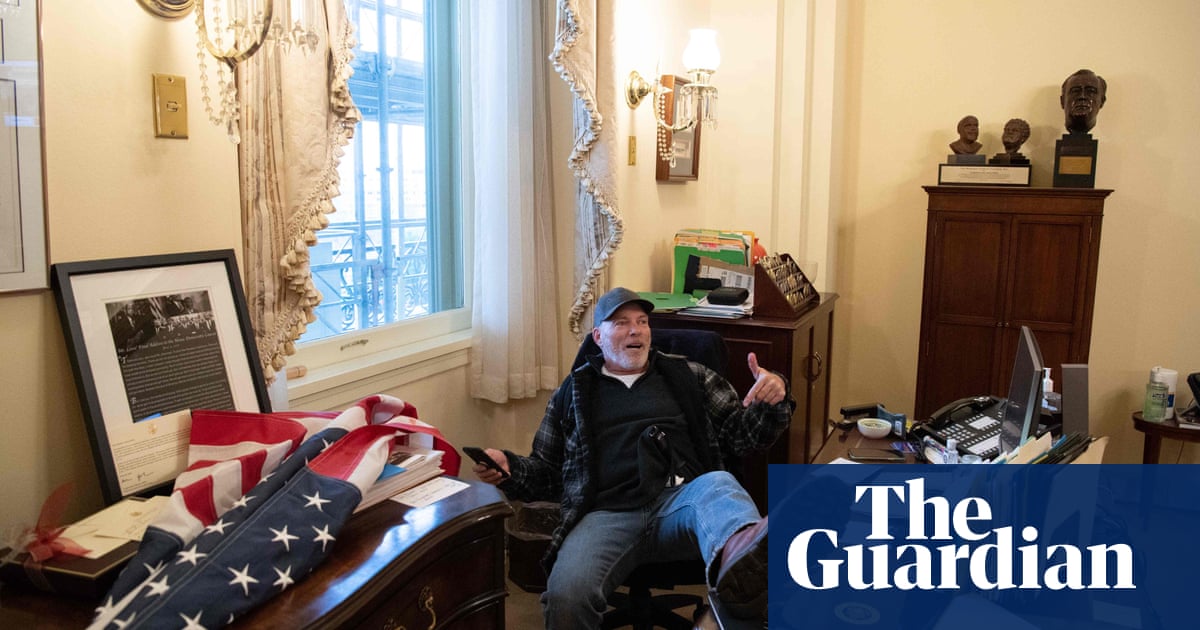 Of all the pictures that were taken during the insurrection at the US Capitol on 6 January, one of the most famous is of a man sitting on a chair with one foot on the desk of the US House speaker, Nancy Pelosi.

That man, Richard Barnett, was told by a judge on Thursday that he is to remain in jail until his next court date in May.

Barnett, a self-proclaimed white nationalist, began to yell at US district judge Christopher Cooper, saying “it’s not fair” that he should remain in custody as he awaits trial.

“Everybody else who did things much worse are already home,” he told Cooper during the virtual hearing, according to court records and reporters listening in. “I’ve been here for a month, they’re going to set it for another month, and everybody else is getting out.”

Barnett was arrested in January in Arkansas, his home state, and faces a series of federal charges over his alleged role in the insurrection, including violent entry, disrupting official proceedings and disruptive and disorderly conduct.

Upon leaving Pelosi’s office on the day of the riot, Barnett was seen by a New York Times reporter holding an envelope which displayed Pelosi’s letterhead. He told the Times that he “put a quarter on her desk” in exchange for the letter. He also said he “wrote her a nasty note, put my feet up on her desk”. Barnett is also facing charges of theft of public property.

In a statement to NBC News, Joseph D McBride, Barnett’s attorney, denies that his outburst was directed at the judge.

“Mr Barnett’s frustration stems from the fact that he is incarcerated pre-trial, despite lacking any criminal history, being gainfully employed, respected in his community and in a stable relationship for over 20 years,” the statement said. “Normally, facts like these are more than enough for an individual to fight their case from the outside.”

More than 250 people have been identified by the government as suspected participants in the riot. The trials of those who have been charged began last month and will probably last months.

Tags
US Capitol breach US News US politics World news

I’ve Spent $60,000 to Pay Back Student Loans and Owe More Than Before I Began