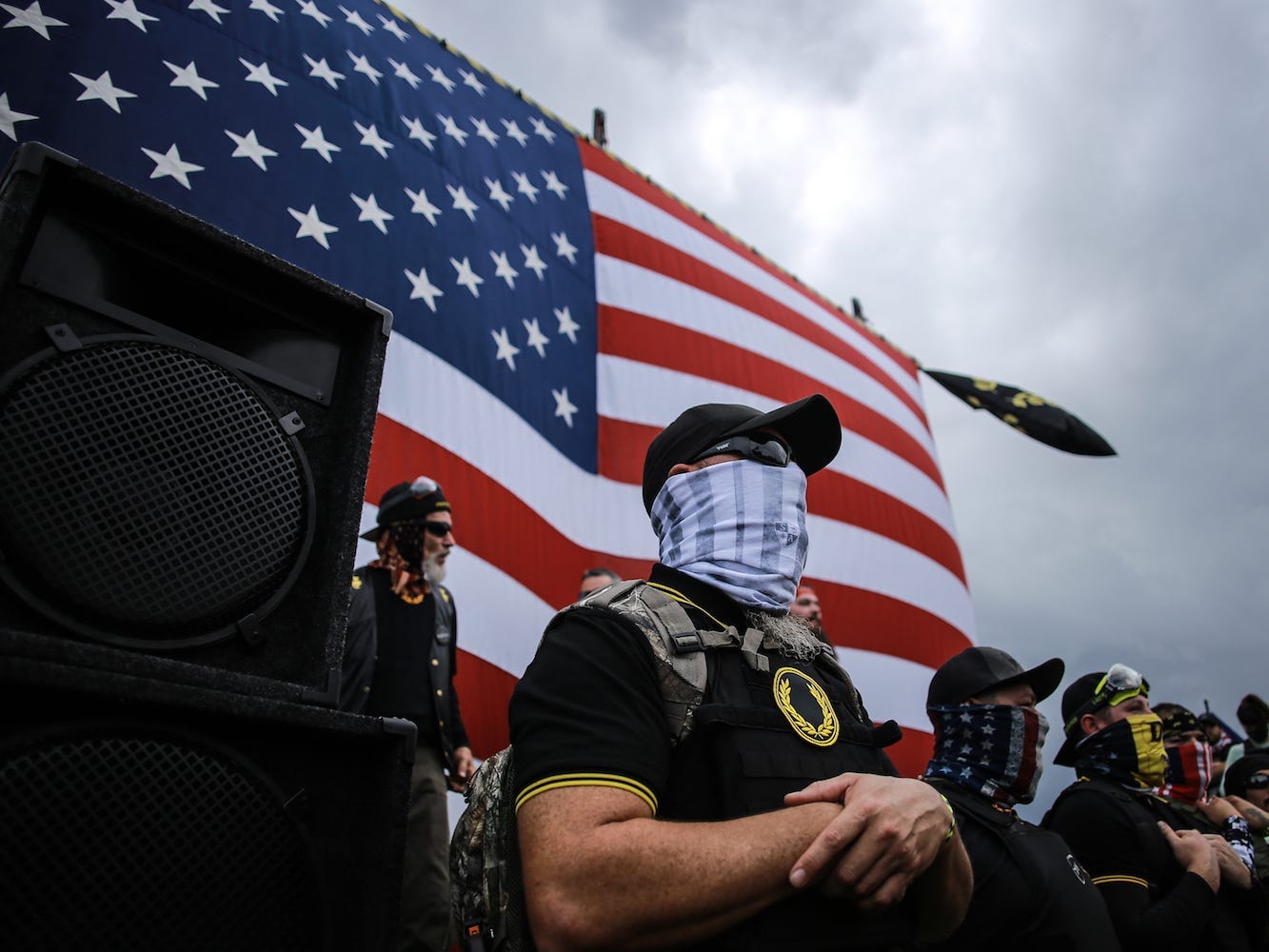 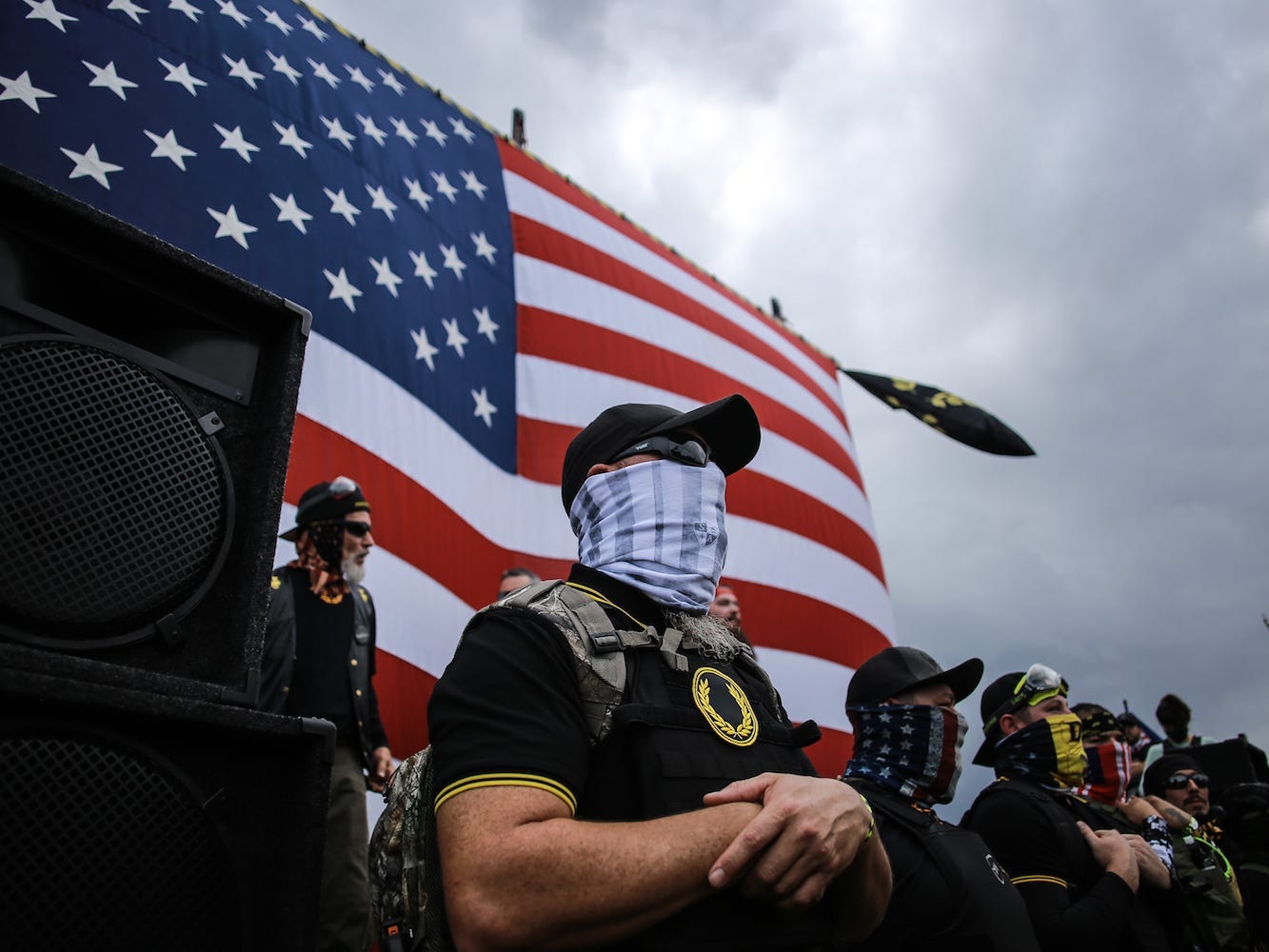 A member of the Proud Boys guards the front stage as another member of the proud boys gives a speech during a rally at Delta Park in Portland, Oregon, on June 26, 2020.

Chinese Americans and ex-pats from China donated more than $80,000 to the Proud Boys, a report says.
The group was crowdfunding to pay for medical expenses after a clash with BLM protesters.
Donors said they sent money because they felt that America was under attack from communism.
See more stories on Insider's business page.

The far-right group Proud Boys allegedly received more than $80,00 in donations from Chinese Americans and the broader Chinese diaspora a month before the Capitol riot, according to a report by USA Today.

The money was sent as part of a crowdfunding effort to help the Proud Boys pay for medical expenses after four people were stabbed in Washington DC in December 2020 during a confrontation with Black Lives Matter protesters (officials did not comment on which group the injured individuals belonged to at the time).

The fundraiser was set up on the Christian fundraising site GiveSendGo on December 17, five days after the incident.

The crowdfunding effort raised a total of $106,107 – 80% of which came from American Asians and the broader Chinese diaspora, according to USA Today, which obtained data from the whistleblower site Distributed Denial of Secrets.

The investigation tracked some donations to addresses in China, Hong Kong, and Taiwan.

Several donors who spoke to USA Today said they had sent money to the Proud Boys because they supported Former President Donald Trump, and felt that America was under attack from communism, a claim often touted by right-wing commentators, including conspiracy theorist Alex Jones and Fox News host Tucker Carlson.

The donors also told the paper they felt the Proud Boys were protecting the country from antifa and the Black Lives Matter protesters.

“You have to understand how we feel – we came from communist China and we managed to come here and we appreciate it here so much,” said Rebecca Kwan, who donated $500, USA Today reported. “The Proud Boys are for Trump, and they are fighting antifa, and can you see anything good that antics did except destroy department stores and small businesses?”

Another donor, Donald Wang from New York, who donated $50 to the organization, told USA Today: “The Proud Boys are protecting the innocent people. A lot of people in my community support them.”

The Proud Boys were among the mob who stormed the US Capitol on January 6, which resulted in the deaths of five people, including a police officer. At least 21 of its members have since been charged with federal crimes for their roles in the attack.

The chairman of the far-right organization, Enrique Tarrio, said in a statement to USA Today: “I am happy that Asians support the Proud Boys because of the continuous hate and the relentless assault they get from BLM supporters. So to the Asian community, I'd like to say Thank You.”

In February, Tarrio was unmasked as a former FBI informant, leading some chapters of the organization to distance themselves from the central leadership.

The FBI described the Proud Boys as an “extremist group with ties to white nationalism.” The agency's director, Christopher Wray, said in a testimony before Congress last year he wished the FBI had been better able to penetrate the group ahead of the riot.

According to an NBC News poll from November, 63 percent of Asian Americans across the country voted for President Joe Biden in the 2020 election.

However, 31 percent still voted for Trump despite the fact the former president frequently used xenophobic and discriminatory language while referring to the COVID-19 pandemic, including the terms “kung flu” and “China virus.”

In the last few months, anti-Asian sentiment across the country has also contributed to a rise in xenophobic hate crimes.

Source: Chinese-Americans poured more than $80,000 into a Proud Boy crowdfunder before Jan 6 insurrection

How Tina Turner Paved the Way for Beyoncé