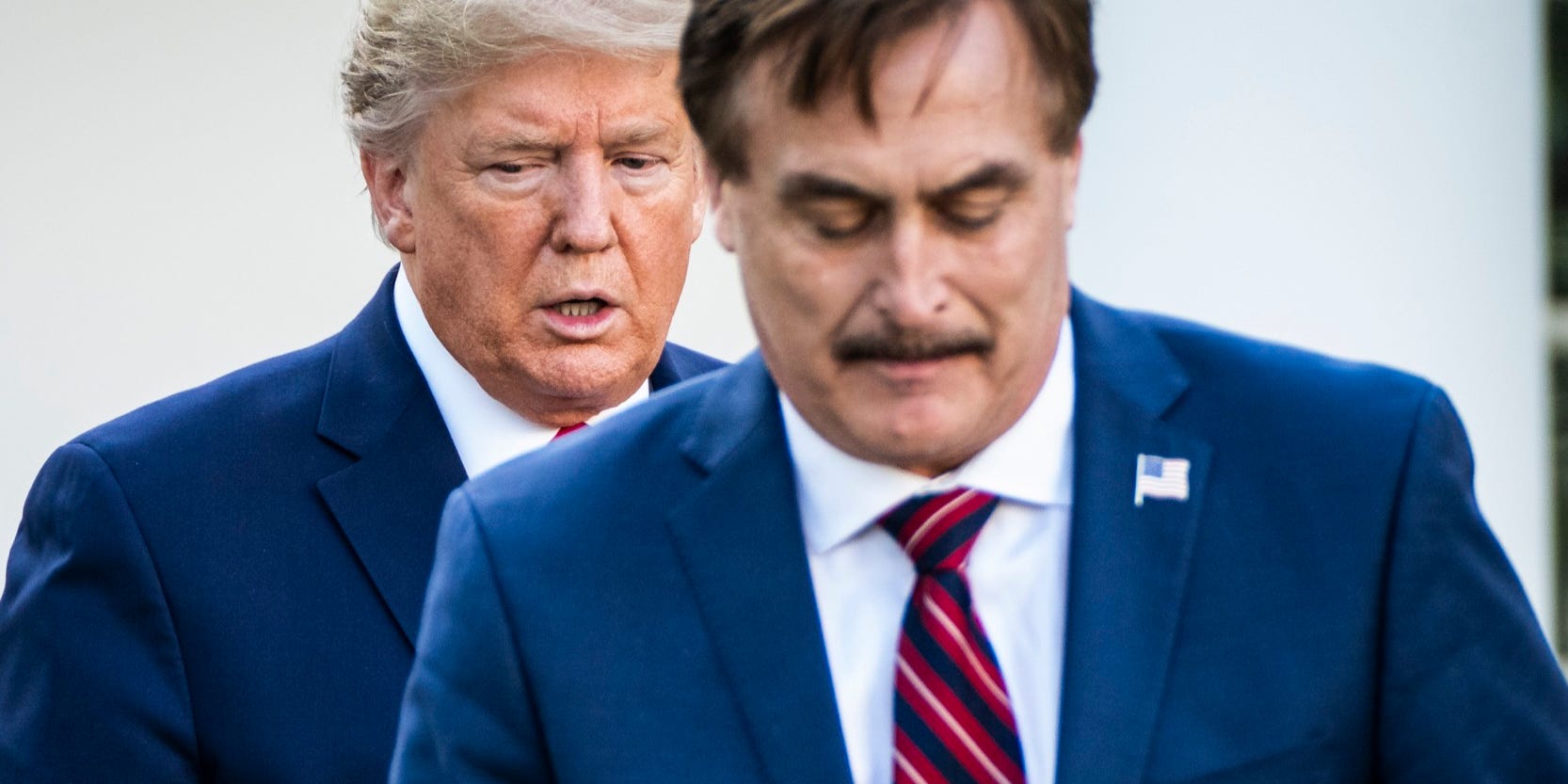 The notion that Trump would be “reinstated” as president before Labor Day is gaining QAnon traction.
Trump is reportedly talking about it with confidantes, claiming the Supreme Court can reinstate him.
The demonstrably false conspiracy theory goes can be traced back MyPillow CEO Mike Lindell.
See more stories on Insider's business page.

The latest preposterous conspiracy theory sweeping the extended QAnon world claims that the Supreme Court will reinstate former President Donald Trump back into office before Labor Day weekend, despite the fact that he lost a fair election nearly seven months ago and has been unsuccessful in dozens of court challenges since.

While the precise origins of the August reinstatement theory remain unclear – it certainly did not come from constitutional law scholarship – the first mention of it to gain significant traction came from staunch Trump ally Mike Lindell, the founder and CEO of MyPillow.

Lindell has been mired in legal trouble for months over his false claims about Dominion voting machines, but he has continued to push lies about the 2020 election and appears largely responsible for this latest conspiracy theory spreading across MAGA-friendly media outlets.

Read more: Republicans and Democrats alike are abandoning one of their favorite – and bogus – fundraising gimmicks. A Vegas scammer's guilty plea has them spooked.

A March appearance on Steve Bannon's “War Room” podcast is where Lindelll first predicted Trump would be reinstated by August.

“What I'm talking about, Steve is what I have been doing since January 9. All of the evidence I have, everything that is going to go before the Supreme Court, and the election of 2020 is going bye-bye,” Lindell said, adding that other countries and “communism coming in” stole the election.

Lindell's prediction relies on an assumption that the Supreme Court will be so impressed by his purported evidence of fraud that they will somehow issue a ruling declaring Biden as the illegitimate winner along with a new inauguration date.

Sidney Powell, a lawyer who filed dozens of failed and pushed outlandish conspiracies about hacked voting machines, shared the baseless theory at a conference of QAnon supporters in Dallas over Memorial Day Weekend (Dominion Voting Systems is suing both Lindell and Powell for defamation).

At the same conference, Trump's former national security advisor Michael Flynn even went as far as to say that the United States should have a military coup similar to the one ongoing in Myanmar in order to install Trump back in office.

The theory has now made it all the way up to Trump, who now has been telling allies that he thinks he'll be reinstated in August too, according to The New York Times' Maggie Haberman.

August appears to be when Lindell thinks he'll finally have the real evidence that will force the Supreme Court to overturn.

Simply put, Lindell and Powell are not telling the truth to their followers.

Firstly, on the logistical front: The Court will be on recess between the October 2020 and October 2021 terms starting in late June. While the Justices still review petitions, applications, and motions during their three-month recess period, it's unrealistic to think the Lindell case would amount to an exception.

Based on recent history, Lindell's chances don't look good. In December the high court refused to hear a long-shot, last-ditch lawsuit filed by Texas AG Ken Paxton directly against four swing states, where he asked the court to void Biden's presidential victories in those states to have GOP-controlled state legislatures appoint electors instead.

It's unclear exactly what process Lindell thinks the Supreme Court would deploy now nearly seven months after the election. But as far as the limits of the constitution go, there's no nationwide mechanism for the Supreme Court to overturn a presidential election, in the same way that sharks can't grow legs on command and stroll onto land.

It all goes back to how the Electoral College works: Presidents aren't elected nationwide, but state-by-state, indirectly. When you're voting for president, you're not directly electing a president but voting for a slate of electors to vote for the presidential ticket you want.

Once the Electoral College casts their votes in December and Congress counts those votes, as they did on January 6, it's over.

After a president is sworn into office, the only mechanism to remove them is through the impeachment process.

And even if Mike Lindell does blow the cover off a massive plot to rig the election, Congress can only remove Biden for high crimes and misdemeanors he specifically committed in office – not the vague conspiracies about foreign governments and the ghost of Hugo Chavez rigging the 2020 election.

That too wouldn't result in Trump being restored to the presidency.

As Trump knows from being impeached twice himself, the Vice President would take over the office of the presidency in the event that a president is removed.

Source: Why Trump can’t be ’reinstated’ as president by August

Ahead of Market: 12 things that will decide stock action on Thursday

I tested the most popular at-home waxing kits - here’s how they compared, and which ones actually work