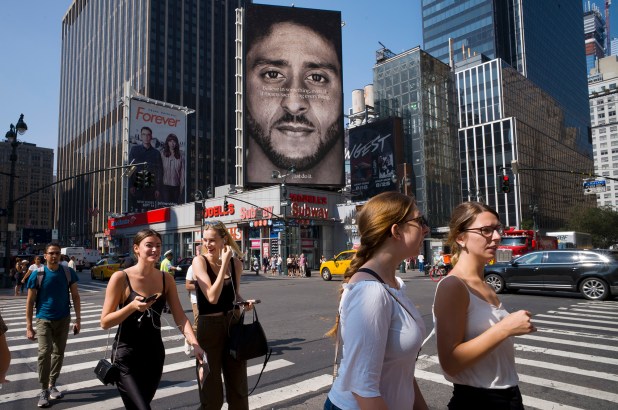 The video ads against Nike will run nationally across cable TV and websites as well as in the Beaverton, Oregon market where the company is based.
AP

A conservative group has launched a more than $1 million advertising campaign to “name and shame” companies and executives for putting “woke politics over consumer interests.”

The video ads will run nationally across cable TV and websites as well as in the local markets where the companies are headquartered. Nike is based in Beaverton, Oregon; Coca-Cola is headquartered in Atlanta, Georgia’ and American Airlines is based in Fort Worth, Texas.

“American Airlines shrunk legroom for passengers and laid off thousands of employees during the COVID pandemic while receiving billions in taxpayer bailouts. Coca-Cola and Nike have both been exploiting foreign, potentially forced, labor in China while American workers suffer,” Will Hild, executive director of Consumers’ Research, said in a statement.

“It is time these corporate giants were called to task,” he continued.

“We are giving consumers a voice. These companies should be putting their energy and focus on serving their customers, not woke politicians.”

Each ad is 30 seconds long, and calls out the CEOs of each company by name. The ad targeting American Airlines takes aim at chief executive Doug Parker’s nearly $11 million compensation in 2020, which was down slightly from 2019.

It also notes the billions of dollars the company received from the US government to keep the company afloat during the pandemic while travel was largely halted.

It also slams the health effects of Coke products on kids and the company’s attempts to downplay such concerns.

And the commercial against Nike CEO John Donahoe mostly centeres on Congressional and news reports that say the company’s products rely on goods produced in China using forced labor.

The ad says Nike has lobbied against US efforts to keep American companies’ supply chains away from Xinjiang, the area in China where members of the Uighur ethnic minority have reportedly been forced into work.

Republican politicians in turn slammed the vocal companies, calling for boycotts of their products.

Our Favorite White Noise Machines for Any Kind of Sleeper