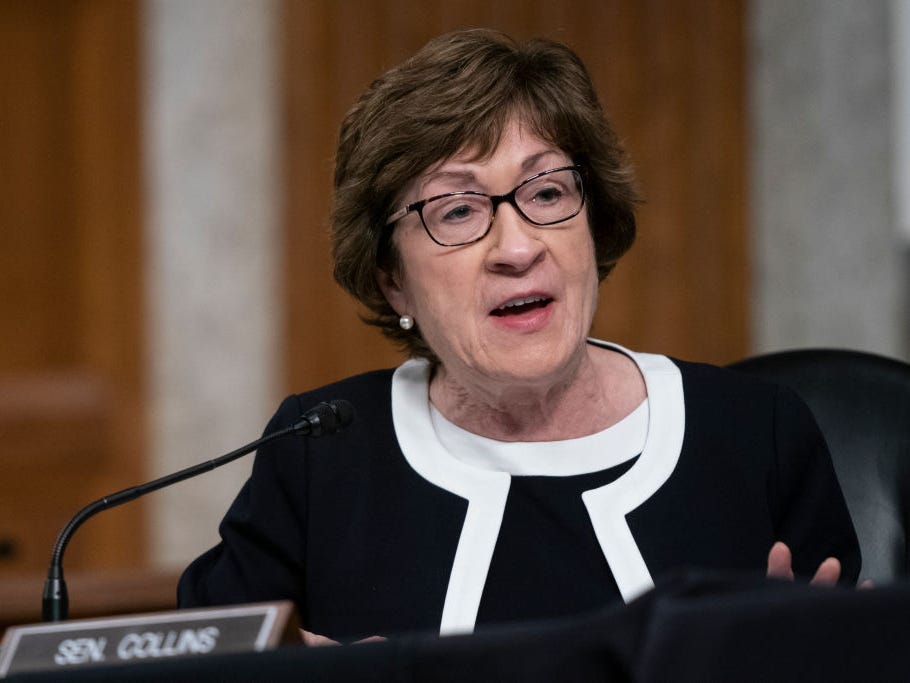 US Sen. Susan Collins (R-ME) speaks at a hearing of the Senate Health, Education, Labor and Pensions Committee on September 23, 2020 in Washington, DC.

The FBI is investigating an illegal scheme to finance Sen. Susan Collins' 2020 re-election.
Prosecutors accused a naval contractor – that Collins once helped – of funneling cash into a pro-Collins super PAC.
According to FEC regulations, government contractors are not allowed to donate to super PACs.
See more stories on Insider's business page.

The Federal Bureau of Investigation is looking into possible illegal donations funneled into a 2020 re-election fund for Maine Sen. Susan Collins.

According to a warrant seen by Insider that was filed in April, FBI investigators accused Kao of moving $150,000 into the 1820 PAC, a Collins-linked super political action committee – through illicit means.

Super PACs are a type of political action committee that can raise and spend unlimited sums of money on political candidates. By law, government contractors cannot donate to super PACs.

Until November 2020, Kao was the head of Navatek, a research and development company that works with the Department of Defense and other government agencies, which has since changed its name to Martin Defense Group.

According to Axios, Collins once helped Navatek clinch an $8 million naval research contract to develop technology for faster, safer boats. This took place in July 2019, before most of the donations were made.

Bloomberg reported that the Martin Defense Group has offices in Maine, where Sen. Collins won re-election in 2020 for the fifth time, against Democrat Sara Gideon.

The FBI affidavit says that Kao and his wife, Tiffany Jennifer Lam, set up a company called the Society for Young Women Scientists and Engineers – a shell company that was used to funnel money into the 1820 PAC. Kao did so by having Navatek write the Society a $150,000 check, which was then given to the super PAC.

The FBI further alleged in documents appended to the search warrant that between June and September 2019, Kao's bank records indicate that he reimbursed family members who made donations to Collins' re-election campaign. At the same time, Navatek also refunded any of Kao's colleagues who made financial contributions to Collins.

Known as straw donations, these are illegal means that some donors use to circumvent campaign contribution limits by sending in funds on behalf of other people.

The warrant application quoted an email exchange between Kao and the senator's finance director, which read: “If you have friends or family members that would be willing to donate please don't hesitate to send them my way.”

Annie Clark, a spokeswoman for Collins, told Axios over email: “The Collins for Senator campaign had absolutely no knowledge of anything alleged in the warrant.”

Kao is currently facing other legal issues; the US Department of Justice in September 2020 charged him with COVID relief fraud. Prosecutors alleged then that Kao received more than $12.8 million in Paycheck Protection Program (PPP) loans by filing false claims. He was charged with two counts of bank fraud, and five counts of money laundering.

Do You Like Piney, Dank Craft Beer? Then These IPAs Are For You