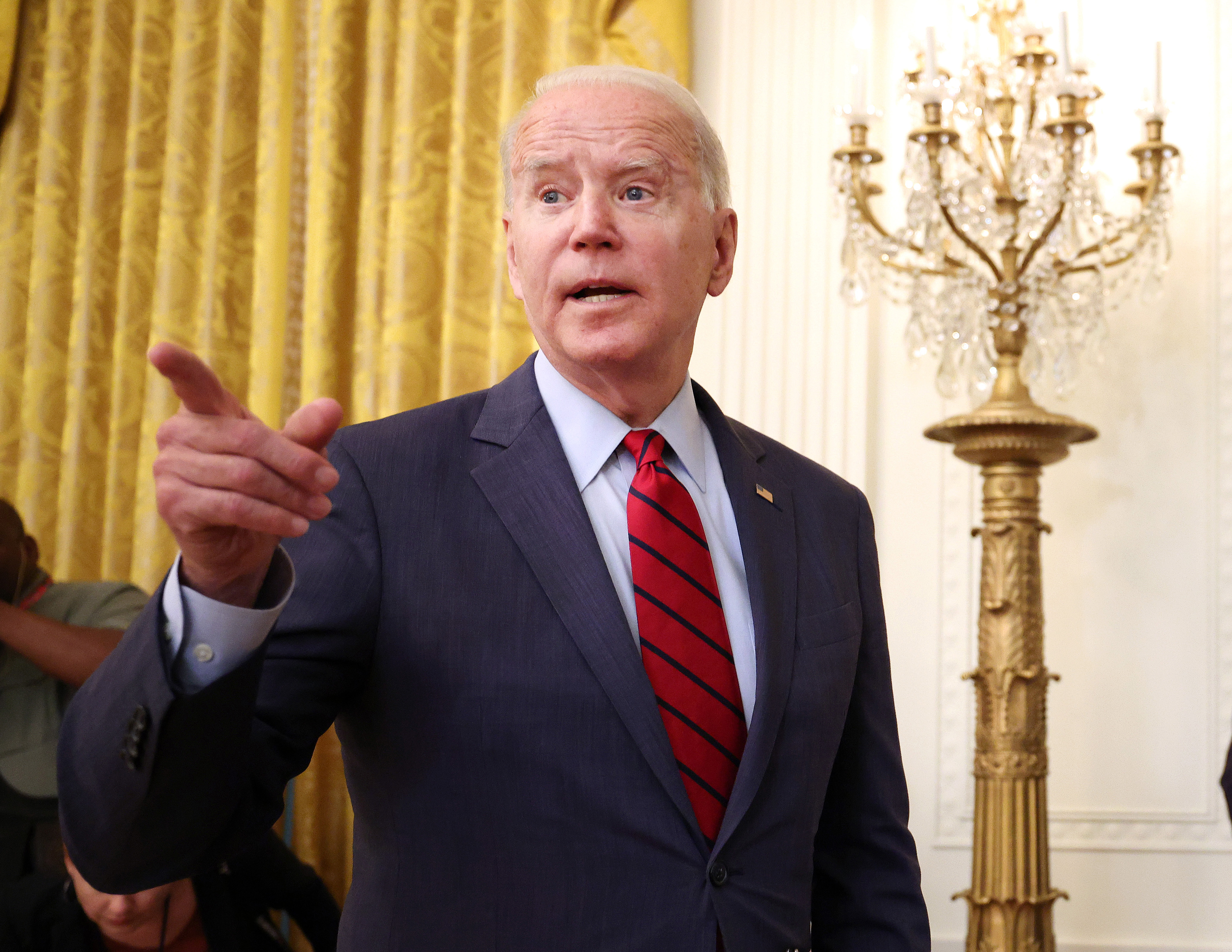 The Justice Department filed a major lawsuit to challenge Georgia’s controversial new voting law in federal court on Friday, alleging that state lawmakers passed it to hinder Black Georgians’ ability to vote. The move is the Biden administration’s first major step to push back against the wave of Republican-backed voting restrictions proposed and enacted in state legislatures since Donald Trump’s defeat in November.

“The Georgia legislature enacted SB 202 with knowledge of the disproportionate effect that these provisions, … both singly and together, would have on Black voters’ ability to participate in the political process on an equal basis with white voters,” the department said in its filing. “In enacting SB 202, the Georgia General Assembly intended to deny or abridge the right of Black Georgians to vote on account of race or color.”

In a statement, Attorney General Merrick Garland suggested that more litigation could be imminent. “The right of all eligible citizens to vote is the central pillar of our democracy, the right from which all other rights ultimately flow,” he said on Friday. “This lawsuit is the first step of many we are taking to ensure that all eligible voters can cast a vote; that all lawful votes are counted; and that every voter has access to accurate information.”

The new lawsuit throws the full weight of the Justice Department behind voting rights enforcement for the first time in four years, bringing the Biden administration closer to fulfilling a campaign promise to fight voter suppression efforts by Republican officials across the country. As the Senate struggles to pass a workable voting rights reform bill, and the Supreme Court weighs further blows to the Voting Rights Act of 1965, the timing couldn’t be better.

SB 202 enacted a wide range of changes to Georgia’s voting laws when Governor Brian Kemp signed it into law in March. The bulk of the Justice Department’s 40-page complaint revolves around changes to the state’s absentee ballot process. More than 1.3 million Georgia voters had relied on mail-in ballots to reduce their risk of contracting Covid-19 and out of personal convenience, which played a role in the state’s decision to elect Joe Biden as president in November and send two Democratic senators to Congress in January.

Those victories prompted the state’s Republican officials to rewrite election laws this spring to make it harder to cast a ballot in the future. There was no evidence of fraud or misconduct in Georgia’s elections last year, but Republicans justified the restrictions as necessary to ensure “election integrity.” Trump and his allies also spent months spreading lies and conspiracy theories about the results in Georgia, most of which revolved around the use of mail-in ballots. Ironically, Georgia Secretary of State Brad Raffensperger, a Republican himself, attributed Trump’s defeat to the former president’s frequent smears about absentee ballots.

SB 202 imposes a series of new hurdles on Georgia voters who want to use that method in the future. Georgia now requires voters to go through a more onerous ID process to request one, reduces the time period when voters can request them, and cuts the number of secure drop boxes where voters can return them. The state also barred local officials from sending out unsolicited absentee ballot applications to registered voters and created new penalties for third-party voting rights groups that distributed them, as well.

In the complaint, the Justice Department alleged that Georgia enacted these restrictions to reduce turnout rates in Black communities. The department cited evidence that Black voters were more likely to request absentee ballots in general, more likely to do so in the final days before Election Day, and less likely to meet the new ID requirements. “SB 202’s limits on the number of drop boxes that each county may deploy will cause a precipitous decline in drop box availability in the counties that are home to the largest number of Black voters in the State,” the department also claimed.

The lawsuit also targets a provision aimed at out-of-precinct ballots. For most of the last two decades, Georgia voters could cast a provisional ballot if they tried to vote at a precinct other than their own. SB 202 tosses out any ballots cast this way before 5 p.m. on Election Day and imposes new restrictions on out-of-precinct ballots cast after 5 p.m. “For a variety of reasons, including higher rates of residential mobility and less access to transportation among Black Georgians, Black voters can be expected to cast disproportionately more of these rejected ballots than white voters,” the department noted.

Finally, the Justice Department challenged one of the most infamous provisions of SB 202: a total ban on handing out food or drinks to voters while they wait in line outside polling places. In Georgia’s larger urban areas, long lines are a common enough occurrence at the polls that voting rights groups often hand out supplies so voters can stay in line. “These efforts were frequently run by Black-led community organizations to provide respite to waiting voters at majority-minority polling places, which have been disproportionately plagued by long lines,” the department noted, suggesting that the ban was intended to ensure that the long lines dissuade Black voters from casting ballots.

DOJ’s lawsuit was brought under Section 2 of the Voting Rights Act of 1965, which generally bans states from enacting racially discriminatory voting laws and policies. The department noted that Georgia had an obvious and persistent history of discrimination on this front, pointing to the state’s inclusion in the VRA’s preclearance regime, which required certain jurisdictions to receive federal approval before changing their election laws. That system ended in 2013, when the Supreme Court struck down the preclearance formula in Shelby County v. Holder. Garland announced the lawsuit on the eighth anniversary of the ruling.

To build its case on the Georgia legislature’s bad-faith motives for passing SB 202, the department pointed to the surge in Black turnout in recent elections, which led to Stacey Abrams’s near-victory in the 2018 gubernatorial race and the wave of Democratic victories in 2020. DOJ also cited numerous remarks by Georgia Republican officials, including a prominent state lawmaker who made clear that “election integrity” wasn’t the real goal of restricting voter participation.

“The Secretary’s decision not to distribute unsolicited absentee ballot applications for the November 2020 and January 2021 elections followed criticism from the Georgia House Speaker, David Ralston, who warned that mailing applications to all active registered voters would ‘drive up turnout,’” the department noted. “Speaker Ralston further claimed that increased turnout would be ‘extremely devastating’ to election outcomes that he favored.” DOJ also pointed to growing racial animosity in state elections in recent years, noting that former Senator David Perdue “mispronounced and mocked the pronunciation of then-Senator Kamala Harris’ first name during a campaign event, despite having been her Senate colleague for four years.”

Whether the Justice Department will ultimately succeed at blocking the SB 202 provisions is unclear. The lawsuit’s fate may depend on the outcome of Brnovich v. Democratic National Committee, a Supreme Court case on two Arizona voting restrictions that is set to be decided by the end of the month. At issue in Brnovich is what the plaintiffs in a voting rights case must prove in court to invoke Section 2. At oral arguments earlier this year, the court’s conservative majority seemed inclined to support a higher threshold for Section 2 claims, which would make it harder to challenge state laws and policies under the Voting Rights Act.

In either event, Friday’s lawsuit is the Biden administration’s most concrete step yet to defend voting rights at the federal level. It represents a sharp turn from the Trump Justice Department, which drastically cut back on voting rights enforcement for the last four years. While the Georgia case may be the most high-profile battle in the voting wars over the next few years, the greater test for Garland and the Biden Justice Department will be whether it will carry the fight to other states and less prominent cases as well.

Source: Biden’s Justice Department Is Coming for You, Georgia Republicans